VENICE BIENNALE: May you Live in Interesting Times indeed 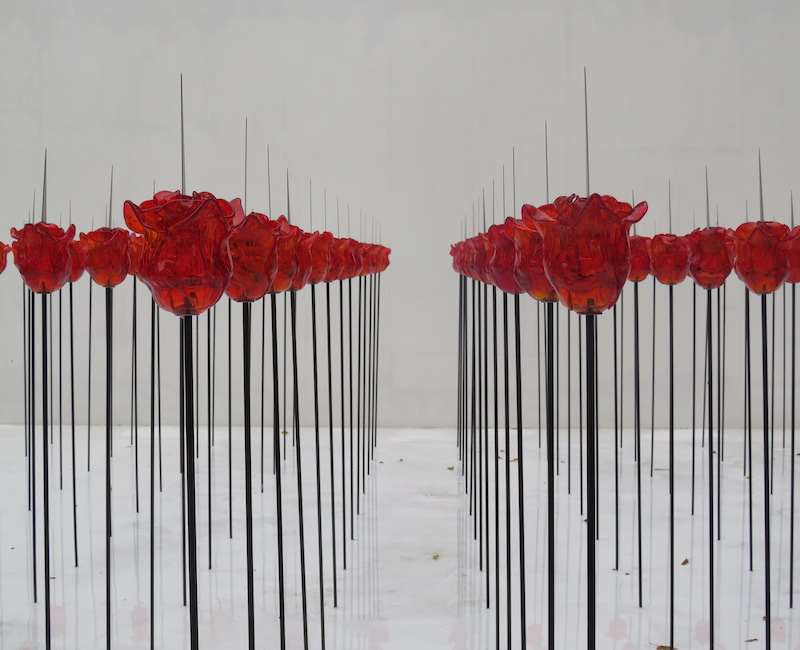 Razors in the roses by Renate Bertlmann

It was a day spent roaming around Venice, fuelled by the light-heartedness of interesting discussions and good friends. Students moved around the Giardini and the Arsenale, chatting with one another as they stood attentively before each piece pondering over its depth…or lack thereof.  The depth of the art was, indeed, a point of contention.

All throughout the visit, puzzled faces or quizzical expressions were seen in front of the canvases, screens and sculptures. The occasional giggle would filter through the noisy rooms, perhaps as an expression of disbelief. And after each piece had been scrutinized, the students would gaze at one another and ask, “What on earth was that?”

This is not a groundbreaking sentiment, and it seems that contemporary art has often been met with deep confusion. Let us not forget the early critics of Jackson Pollock who would not even think to deem his work as art. Or the initial resentment the Impressionists faced when they decided to abandon realism. In some cases, this is not even a question of whether the work is valid as art, but rather, we question if it succeeds in conveying its message. Some people argue that an artist’s message should be inferred simply by the piece alone and should not have an explanation to support it. This line of thinking eliminates the possibility of depth in abstract art:

And yet, all abstract and revolutionary artists seem to grow on us and our understanding of art. We view Van Gogh, Gaugin, Picasso and Warhol as geniuses, as each expanded what our limited view of art had been for decades. How do they get away with it? As we evolve we find that different values better represent us and we become more accepting of what was previously hated or judged. In the case of Picasso, we may feel better represented by a disjointed modernist view on a strange, strange world. We may assimilate with Warhol’s criticism of materialism and American consumerism.

What we are experiencing now may simply be another case of the cyclical nature of art. Perhaps in ten years, the displays the students saw will be revered as great leaps in the progress and understanding of art and will be studied in classrooms globally.

We should be, if anything, excited by the ever-changing ways people are finding to create art; even if we do not like a piece, we can still find its craftsmanship notable or inspiring. At the biennale, St. Louis’ own art students could be seen mimicking or taking aspects from what they had viewed, their graphite pencils scribbling quick recreations of texture and tone. But we do not need to be artists to find good in everything and we do not need to be critics to judge things proportionally.