A trip to Amsterdam 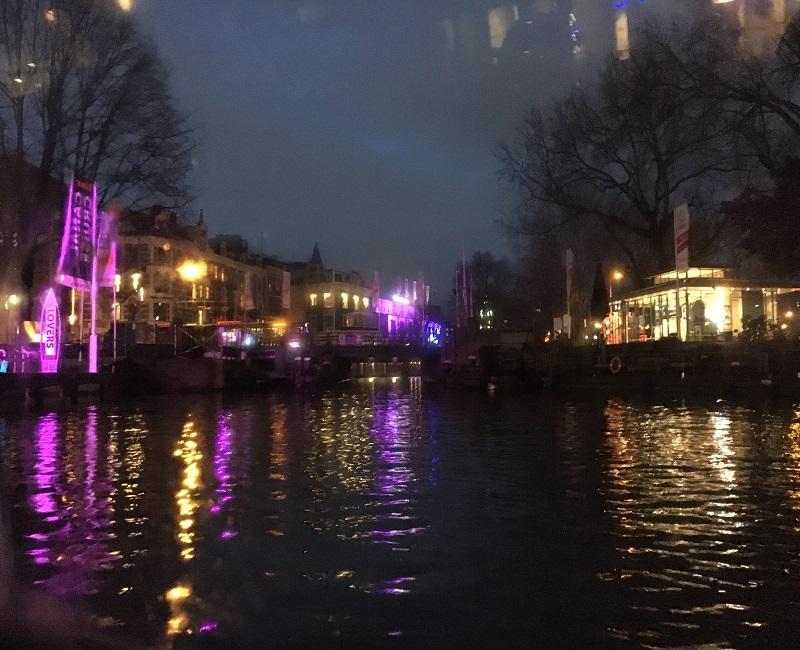 After a long period of time in Milan, a trip to a foreign country was necessary. My parents and I decided to go to Amsterdam. Each day we went to a different part of town, experiencing different museums and different life styles.

This city could vary from sad and lonely, to joyful and busy. It is filled with restaurants from different countries. Probably for the high level of tourism, this is a necessary element. The tourists in this city were mainly South Americans, Italians, French and English. Since Dutch is not a very easy language to understand, the waitress could speak many others. Being from Italy, it was actually quite surprising the amount of people that spoke Italian. For all these tourists, the city of Amsterdam is filled with museums and attractions. I went to The Van Gogh museum, Anne Frank’s show and house, NEMO (science and technology museum), light festival. Starting off with one of the most well known individuals in the world: Anne Frank.

After arriving in Amsterdam, we decided, to go see a show based on her life . The scenography and set changes during the show, were amazing. The acting skills of each character interpretation were stunning. A three-hour show seemed a boring way to start this trip to Amsterdam but as soon as the show began,  a new atmosphere was formed immediately. The actors were able to convey sadness, despair, anger and rare sparks of joy. The enormous audience’s chatter was silenced and they quietly gazed at the actors in the show. As it finished all the audience stood up and cheered, a few were crying and a few were screaming “Bravo!”

After such a busy and intense day a good sleep was necessary. The hotel we were at was quite near the central station and the centre of the city. Even with a tiny room, all comforts were included. There was also a wonderful view. Most of the houses in Amsterdam, including the hotels, were tall and thin. Therefore some did not include the lift, but they all had steep stairs. Going up and down the stairs would be hard and tough, unless an individual was fit and healthy. In fact probably one of the most noticeable features of the population who lived in Amsterdam, was that they had fit and energetic bodies.

The next day we went to the Van Gogh Museum. The first part included the paintings from both Van Gogh and Munch. It compared their two life styles. Surprisingly they were actually quite similar. Both had a tormented and complicated life, which they then represented in their paintings. Van Gogh cut off a piece of his ear lobe, whilst Munch shot his hand. Both painters have used pointillism in their painting and both found inspiration while travelling to Paris. Obviously Munch came years later, but he said: “There is some kind of connection between us” referring to Van Gogh. After this connective art exhibition between the two painters, there was a whole floor based on the most important paintings from Van Gogh.There was obviously the “sun flowers” painting which was displayed in a separate room, having so many visitors wanting to look at it.
Later on, we went on a small tourist boat, to explore the Amsterdam canals. Lucky for us that same day there was a light festival. Therefore with the sky already dark  at 5pm, we were able to see wonderful sculptures. These were light sculptures made by famous architects, with a theme of friendship. Most were abstract, whilst others were moving lights that would represent, for example, two friends rowing a boat or two faces talking.

On the third day we visited the Hebraic area in the city. It was called “Jordaan” and differently to the rest of Amsterdam, it was strangely quiet. It had many small streets with tall buildings all packed up close. It was lonely place, but certainly tranquil.
We also decided to do some shopping in the main streets. All the souvenir shops that we encountered had a peculiarity. Other than basic chains or post cards, there would be biscuits or lollypops made with 100% cannabis juice. It was quite a surprise to see so many products sold with this juice. The products were exposed near to the cash desk and they were sold as normal food products or cigarettes.
Finally on the third day we went to “leidsplain”, a small area filled with restaurants from many countries. There were Mexicans, Italians, Indonesians, Chinese and Argentinian. Most were steak houses, meat being one of their main products. In general the food that we ate was good, from the Dutch specialties (sausage, mash potato mixed with spinach) to ordinary burgers.

The fourth day was very busy. Starting off, after a quick breakfast, we headed off to NEMO: the science and technology museum. This included different areas. There was the energy and motor sector, where on display were different engines moving with the light, or how an engine was composed. Next there was the mathematics area where various shapes were discovered through bubbles. Then there were different long tubes placed at different steps, which allowed the visitors to explore sound velocity. Next there was the space section. All the planets were fully described and different rockets models were displayed. Finally there was the body sector. This was divided in: physical and mental. In the physical part, the composition of the cells, the brain and nervous system was fully described. For the mental part, the emotions of teens in particular, were demonstrated. There were tests on self-esteem, on how much of a risk taker an individual is or on a character description of an individual based on their musical taste.

After quickly rushing through the whole museum, we went to  “Anne Frank Huis” (house). We ate at a hotdog stand, where many locals ate. The experience inside the Anne Frank’s house after watching a show based on her life, and obviously reading her diary, was indescribable. There were phrases stuck to the wall from her diary, which described the inside of the house. There were small video’s from Otto Frank, her dad, and Meip Gies one of the benefactors, helping the Frank’s and Van Pels’ families. Each room included personal details. There were the books that some of the adults read, like Charles Dickens’ Oliver Twist. There were the pictures Anne stuck on her wall to decorate. The house was so well presented that some of the women, while walking though it, were crying. At the end each individual was asked to write something about his or her experience.

Sadly the fourth day was our last. I did miss understanding the people that were surrounding me in trams or buses. So I was almost pleased to go back to Milan and find normal products in souvenir shops. Though this population of healthy and fit individuals who all used bicycles and would run over the people walking because they were going so fast, was quite welcoming.

As a tourist I was pleased about how people treated you and how they tried to help you with the language. Even if I am used to large metropolis, I can say that this fairly small city has pleased me. I would certainly go back to Amsterdam and I would certainly recommend my friends and relatives to visit.