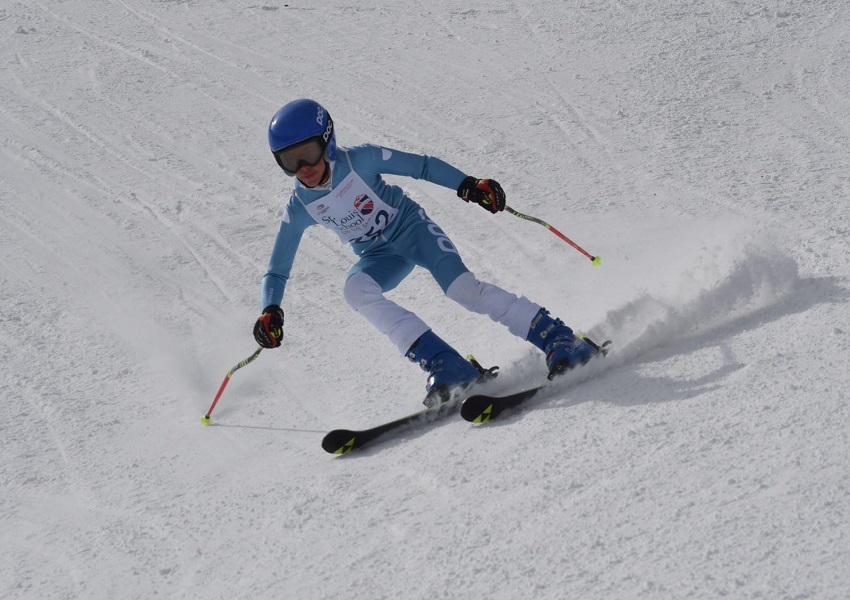 Jacopo B, Year 7 category 1st Place, in action at St. Louis on the Slopes

The day was perfect- not a shadow of cloud and a sense of anticipation in the air at Courmayeur. It was the 29th January, which meant one thing- St. Louis on the slopes 2018! Many students from around the St. Louis community were ready to race against their friends and had been waiting for this moment for ages.

Initially, pupils met the Ski School Courmayeur ski teachers in Piazzale di Dolonne, a very important square in Courmayeur. It was an early start and there were a lot of tired faces and cups of coffee being passed around parents and teachers! The square was full of ski suits of every imaginable colour and a mixture of tension and expectation could be felt.

Once the racers had been gathered together, the serious business began- every student had the opportunity to choose their race group, basing themselves on their level of ability and skill. Some people arrived at this fabulous destination with their parents for support, while others arrived by a special bus, organized by the school. Shortly after their arrival, the ski teachers summoned the cableway to take the scholars to the slopes!

A cable-car transports skiers up the slopes at Courmayeur, against a stunning alpine backdrop Courmayeur is an Alpine resort northwest of Milan, at the foot of Mont Blanc. It’s known for the SkyWay Monte Bianco cable car, offering views of peaks like the Matterhorn and Monte Rosa. It’s a whopping 1224 meters above sea level, which can make skiing or snowboarding a fairly scary experience.

Having arrived at the summit, students were given some time to warm up and practise their moves before the races began. This was an ideal opportunity for a quick reconnaissance of the track. Another cableway took competitors up onto the slope and the races started. There were many great racers who enjoyed extraordinary runs! But the casual skiers also had the
opportunity to explore some of Courmayeur’s great slopes, before finally skiing back to the base camp, where Super G workers and St Louis School parents were organized and ready to announce the winners. There was a real sense of excitement before the prize giving for 1st , 2nd and 3rd place in each category.

Jacopo B, 1st place in the Y6-Y7 category, was both exhausted and delighted with his medal. When asked if he was surprised with his victory, he said: “There were a few nerves before the race but I was confident in my ability.” Jacopo, who began skiing at the age of 3, went on to say: “My mum was a big reason I started skiing. My first professional ski club was ‘Scuola Sci Speciale Tagliabue in Engadin, Switzerland. I recently achieved 1 st place in the ‘Sportiva Parù’, so I’m feeling great at the moment”. Well, from everyone at The Caviglia, we wish Jacopo luck for his next big race.

Alberto S, one of Jacopo’s biggest rivals, is another young skier who grew up racing at Courmayeur, representing Ski Club Courmayeur. When we asked him if this gave him a slight advantage, he said: “There are a lot of great skiers this year and most of them are my friends. Luigi P (another St. Louis ski star) is another very strong and we always expected it to be a close race”. Alberto specializes in Slalom Gigante and was among the favorites for this year’s title. So, St. Louis on the Slopes 2019 should be an extremely competitive event and we look forward to seeing the next group of skillful skiers from Year 6!