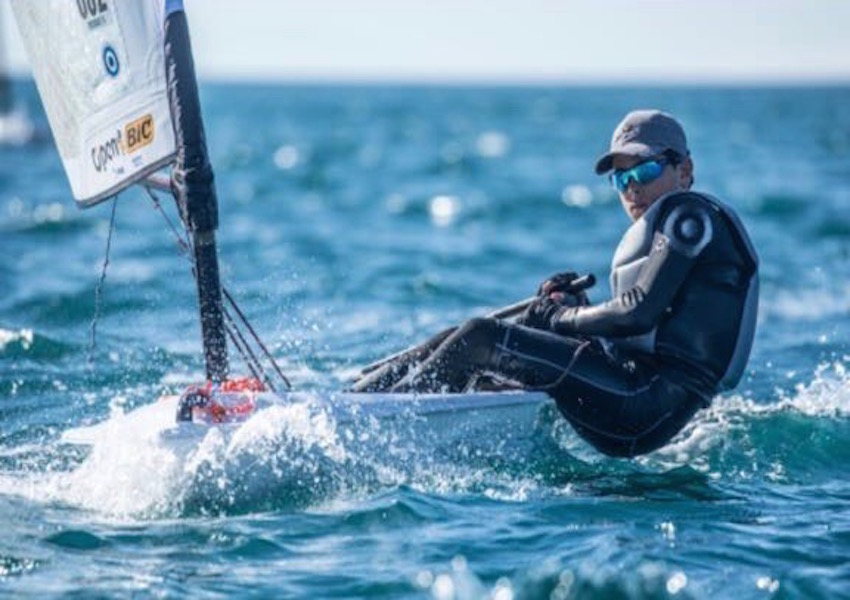 Sat in Room 20 of Via Caviglia, Leopoldo cuts a calm and collective
figure, just two of the attributes needed to achieve success in the world of
sailing.

It’s a Friday afternoon and Leo is already thinking forward to a
weekend of relentless, yet rewarding, training, on the crystal water of Lake
Garda. For the former European Under 13 Champion, the water-way to
success began eight years ago, in a boat yard in Rome…
“My father was always a keen sailor”, Leo reflects. “So I suppose it was a
natural decision to take to the water. But, I only really began to start taking it
seriously when I visited my Uncle’s sailing club in Rome. I was four years old
at the time but sailing was already in my blood”.

Today, Leo races for Team Circolo Vela Arco, based in Veneto, racing the
hydrodynamic ‘Open Big’, a single handed skiff, which requires both strength
and agility to maneuver through the choppy waters. “Compared to other
racing boats, it’s relatively cheap”, he concedes. “Although it’s still likely to
cost you around 2000 euros. Then there’s the maintenance costs: the ropes,
the rudder, the sail… you can easily spend 100 euros a year on basic
materials.”

It’s not just the cost, which makes Leo’s sacrifice all the more impressive; the
hours spent training also come with their challenges. “I train every weekend,
normally on Lake Garda”, he tells me. “On Saturdays we train for five hours
but on Sunday’s it’s more like eight. I spend a lot of time studying on Friday
nights, just to free-up time over the weekend. The hardest part has to be the
holidays; I’m normally out on the water practising or travelling to competitions
around Italy”.

Indeed, Leopoldo’s success has taken him all over the globe. In October,
2017, Leo and his teammates travelled to Kuwait, on the Persian Gulf, for four
days of competition: “The race was a regatta. It was a tough competition, but I
managed to finish fourth. It was made all the more difficult by the long haul
flight. The winner was an Egyptian boy. I remember the conditions were very
challenging; it was really windy and very hot, as the temperature of the water
was almost 25 degrees, with strong currents. I also had an older type of boat,
which wasn’t very efficient; it was a dingy with poor hydrodynamics, which are
very important in sailing.”

So how does a race work? “We race on different tracks depending on the
conditions. A track is made up of a start, a series of markers, which we have
to sail around, and a finish. There are many regulations, consisting of more
than 70 rules, and it is crucial you know all of them.”

Rules and regulations certainly play a big part in the quest for glory but
conditions, as Leo acknowledges, are perhaps the deciding factor: “In my
opinion, the best conditions for sailing are at a speed of 16 to 18 knots, with
no current and little waves. I think that the worst conditions are when there is
too much wind, strong current and relatively big waves. Strategy is very
important: there are two types of winds, upwind and downwind, and it is very
important to catch the wind just right. I’m obviously alone on the boat. On
board, I tighten and loosen the sheet depending on where I want to head and
how fast I want to sail. I also steer using the rudder.”

With little space to maneuver, injuries are common place in sailing but so far
Leopoldo has managed to ‘steer clear’ of any mishaps. “Thankfully, I’ve never
really had any ‘severe’ injuries, but I’ve been hit a few times by the metal
components of the sail, when strong winds have been blowing. Mainly, it’s
important to keep your hands clear of any ropes or places where they could
become trapped. Speed can also play a big role in keeping safe. My favorite
aspect of sailing is the adrenaline and being in contact with the water. My
idols are probably Soldini, who is a famous Italian sailor, and Valentino Rossi,
even if he has nothing to do with sailing. In both sports there are risks but also
rewards.”

So, does Leopoldo have any advice for students thinking of taking to the
water? “My biggest piece of advice would be to choose a boat you like and
feel comfortable using it, and not to simply go out and buy top quality parts for
a boat as soon as you start. Sailing is about growing into the sport and
working out what suits you best. Unfortunately, it is very hard to make a living
out of sailing, unless you have a good sponsorship. But if you enjoy it, my
advice would be to just have fun and see what happens.”