Five Minutes with … Eva and Christian 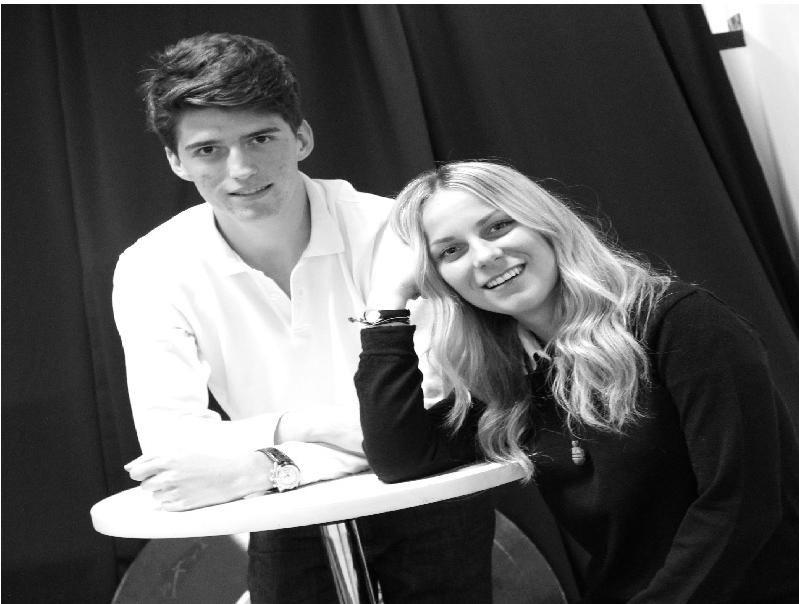 Last Friday afternoon, Cosima and I took some time out of our schedules and had a 5-minute interview with our very own stars of Grease*, Eva and Christian. They were very helpful and talked to us a little bit about their new lives as actors in the school production.

I then asked the two what inspired them to sign up for Grease in the first place and Eva told us “Because I love the film! And I do love musicals!”

Whereas Christian had a different perspective “I liked the idea of interpreting the character Danny Zucco but Mrs Warringer did have to insist a lot before she convinced me to sign up. In the end I did and now that I’m doing it, I realised that I should have said yes sooner.”

Here we noticed that the two obviously have very different personalities and we wondered if this affected anything on stage during rehearsals. Throughout the interview it was clear they were good friends and in our opinion, they would make a great couple!

Next, we asked if the characters that they were playing in the musical were relatable to them or if they were just part of a made up story they had to interpret. Eva told us “To be honest not at all because her[Sandy] personality is not like mine in the slightest.”

On the other hand Christian said “Partially, he has a very cocky attitude at the beginning and some may say I have one too.” At which point, Eva nodded her head in agreement and they burst out laughing.

“And have you ever performed in public before or is this your first time?” I asked the two.

“Well, I was always in the shows we did at school and then some singing stuff out of school but nothing this major or as big as this. This is serious stuff!” Eva stated with a slight tremble.

“Yes, when I was smaller. In The Wizard of Oz, a school production. But never in front of complete strangers” Christian added.

Later, when we asked the question “What are you enjoying the most about Grease?” They both seemed to be very happy about their time in making the school musical and pleased with their decision to participate in the first place.

“To be honest, I like the fact that it seems to have brought everyone together, it’s almost a ritual now. Like we all know that we have practice on Tuesdays and Wednesdays and I don’t know what I’m going to do when it’s all over. It’s going to be empty. But yes, apart from the fact that I enjoy acting and singing, it’s just nice. We’re all friends!” According to Eva.

Christian interjects “ At the rehearsals, even if we’re not friends with everyone, it does get everyone closer together.”

Noticing the tone of their voices when we asked them earlier about previous performances in their lives, we decided to pose the question “Is the pressure getting to you yet?”

Christian was a little more in denial about it than Eva, saying “No, but I know it will. Especially two nights before the show, when I will be in the middle of studying for my mocks. I am a little bit more worried about that than Grease but now that the show is only two weeks away we’ll just have to see what happens.”

Eva concurs “A little, yes, because next week is the penultimate week before the show and the costumes are all coming together, everyone knows their lines and it isn’t really that intense but I do feel a little pressured.”

Heading back towards their lives, I asked the two of them if they had a choice, would they have gone to a performing art school instead of an ordinary one. Eva told us that if there had been any in Italy she would have gone for her last four years. Christian, however gave us a straight off no and told us that he thinks performing art schools don’t produce well rounded students, nor do they give as many opportunities for the future as normal schools. Once again, the two personalities shone in their bold beliefs but contradicted one another.

We then rounded off the talk with “What are your future plans after school finishes, do they involve acting?”

Eva told us “I want to go to college in America and hopefully either go to a music college or a liberal arts one. Yes I want to have a good time at college and learn what I love. Music might be bigger for me than acting but I still might consider it.”

Christian was a little bit more unsure. “I would like to go to university in England but also stay in Milan and study Business at Bocconi. For now my plan for the future is getting a high grade in the IB and then we’ll see. I don’t know if acting is going to be a part of my future career but maybe one day someone will propose a part in their movie. Then, I don’t think I would say no!”

We then thanked the two Year 12s and they headed back to their lesson. We’re very grateful for the time they gave us and the ideas they shared with us. We can’t wait to see their performances and we wish them the very best for their futures, whether they involve acting or not.

*Eva and Christian will appear alongside their fellow Year 12 and 10 students  in the high school’s production of Grease at Teatro Litta, Milan the 7th and 8th of May 2015.