What We Can Learn from Sarah Everard 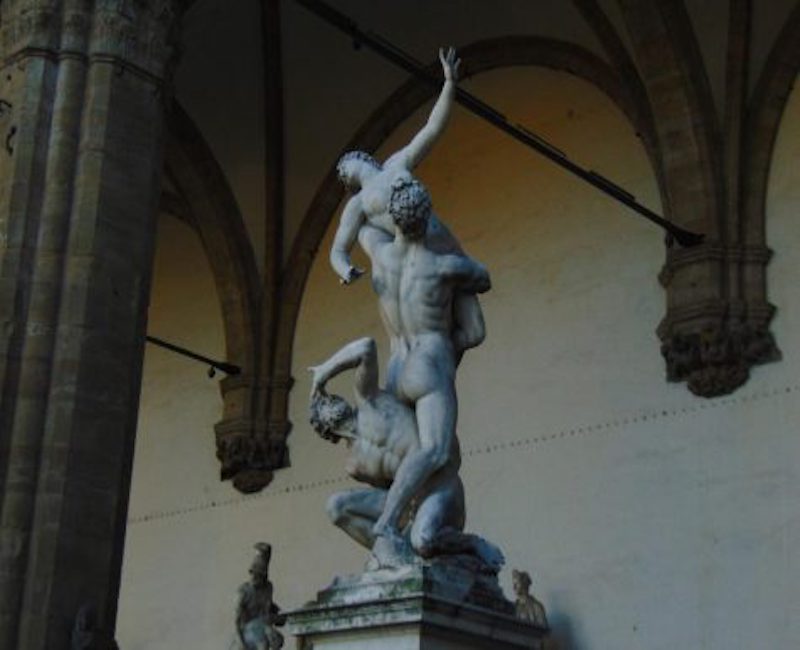 The Rape of the Sabine Women" in Loggia dei Lanzi, Florence

Years ago, I believed that feminism had run its course in the West. The humble aims of the suffragettes had been fulfilled and their great-granddaughters were just projecting: yelling into the void with, what I believed was, their ridiculous, misandrist, semantic-based rhetoric, and twirling their blue-dyed hair. Stereotypes and straw-man arguments made me reject feminism and led me down a dark path of internalised misogyny.

I believed I was equal to men because of where I lived, where I schooled, who I knew, what I could do. I believed this was true for all women. The truth is that, as much as my options have grown akin to my brothers’, I am still not as equal, nor as free, as they are.

This story is inspired by another’s story. Sarah Everard, 33, disappeared on March 3rd 2021. She should not have according to the rules young women are taught about. She wore bright yellows, blues, and oranges on that fifty-minute walk, so she could not be missed. She wore “smart” shoes, just in case something happened. She audibly phoned her boyfriend, as a well-meaning warning sign to them. And it was not enough. Some days ago, an arrest was made and police have since found remains in a Kentish field. It was not enough.

I remember a summer that really shook my misperceptions of feminism. I was at a friend’s house and we had been talking about a photo some schoolmate’s had posted on Instagram: short skirts, high-heels, pretty makeup, and stumbling drunk across the city streets. My friend’s mother interjected with a phrase I have not forgotten: “Well they shouldn’t be surprised if they get raped.”

I have heard many reiterations of this belief in my lifetime. Uncles and Aunts talking about the MeToo Movement posturing that “they always had a choice, so it’s not really assault”. Male teachers asking underage female students if they thought wearing track-suit bottoms to school was “appropriate”. Male friends boggled by the fact that touching a girl inappropriately at a nightclub is a crime. The Katie Hopkins, Milo Yiannopoulos, and Donald Trumps of the world, who demean women’s experience with sexual assault to the point where a well-documented abuser can become the President of the United States.

What Sarah Everard has shown us is that it does not matter what precautions you take or do not take because abusers will abuse who they want, they do not discriminate. Shows like I May Destroy You (2020) have shone a light on what sexual assault looks like, hint: it’s a chameleon beast, taking whatever colour or shape it wants, but the result is always the same. What I find most disturbing about those who uphold those toxic beliefs is that they perpetuate the dehumanisation of victims (was she asking for it?), they create an atmosphere in which 61% of abuse is not reported, for both men and women (National Sexual Violence Resource Center). With that perpetuation, they passively uphold abusers: 995 out of every 1000 abusers will walk away freely (National Crime Victimisation Survey, 2010-2016). They silently agree that jail times for rape can be diminished to 6 months as it was for Brock Turner. They turn the camera away from Prince Andrew, focusing instead on vilifying a woman.

Maybe then, it is time we stop painting victims with the colours of abusers: assailants, not victims, are shameful agents and the ones at fault. I would like to live in a world where my dad does not need to remind me that I should take a taxi home at night, even if I am only twenty minutes away. I would like to know that when a young woman goes to the police with tears in her eyes that her nightlife tendencies and the clothes she wore are not deterrents from seeing her truth, seeing her humanity. Feminism is still crucial everywhere because half of our population is living a secondary life: 97% of young women in the UK have experienced sexual harassment (UN Women UK) and 1 in 3 women globally has been subjected to sexual or physical violence (Violence against women Prevalence Estimates, 2018). These statistics have denied us our humanity, our right to safety, and our right to transcendence as one French philosopher would say.

Sarah Everard will not be the last of these stories, but I want to believe that she will mark a change in the discourse around violence against women. To the men I love, the change lies in you. Have those conversations with the women in your life about their experiences. Call your mates out when they say horrible things. Learn how to make women feel safe around you. Realise that a woman’s experience with assault is never an invitation for your defensiveness, for your “not all men”. Understand that, though you would never hurt a woman, your actions only matter if you actively become part of the solution. Most importantly embrace feminism, because it is about you as much as about us, and it invites us to topple down this patriarchal legacy that has hurt us all: to rip the old canvas and paint it anew, benefitting all.